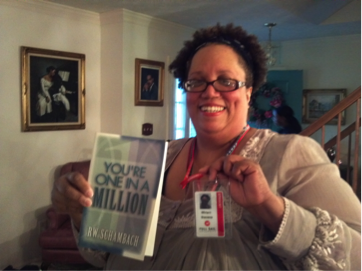 Miriam received a gift book while participating at women’s fellowship meeting. Miriam also got a chance to videotape the activity for a class assignment. Photo Credit: Claudine Anthony

When life throws you a curve ball do you stay in the game?

This journey would prove to be a tenuous but exciting adventure. She decided after dreaming of completing a booklet, going back to school to get her MA, and launching an online website; actively making that become a reality was in order. In May 2010, after her traumatic life event, being let go from a very lucrative paying job, and stressing over all the losses in her life to the point of ill health, Miriam had an epiphany. Desperate and on her seemingly last ounce of hope that change would occur for her, she asked her adult son to pray for her. He did and as he begun to petition God, a breakthrough of laughter came forth from both of them and hence The Thankful Revolution started. She realized that in everything she had to give God thanks regardless of her current situation so she did. God downloaded to her a directive to begin a movement encouraging a worldwide change to just be thankful even in the midst of tremendous pressures, stressors, and turmoil. Thus, The Thankful Revolution was birthed online and developed in conjunction with her Masters studies. Miriam has regularly posted on her website intriguing articles, inspirational messages, and educational videos that she and others have developed.

Part of Miriam’s journey to completing her Masters degree is culminating with a Capstone Thesis project. The topic that Miriam has chosen brings light to a virtually untouched view into Black TV Programming. Miriam asks the question, “Is the Internet filling the void?” She has over the course of several months conducted extensive research and posted regularly to the online community using her various social media channels such as Facebook, Twitter, and YouTube. Her initial steps to finding answers for her question was to create an introduction video and launch several surveys engaging online users to provide feedback. Below you can view both presentations: 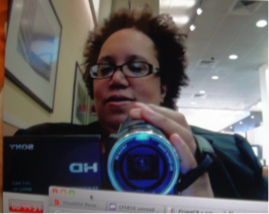 Miriam Stevens decided to pursue a Masters of Arts degree in New Media Journalism after a near death attack on her life. Photo Credit: Miriam Stevens

The Thankful Revolution embraced when adversity was her constant companion. In 2008, after an almost life-ending home invasion, Miriam’s world was turned upside down. The reality that life is brief so go for it became her goal. Part of her recovery was to embrace the passion to write, and write is what she did. She even went as far as to enroll in a New Media Journalism Masters of Arts program at Full Sail University after being out of school for 25 years.

Currently, Miriam is seeking and conducting interviews so an insider’s viewpoint of the industry can be showcased. If you like to learn more about her work and even join in the conversations, please contact Miriam via email at miriamsmithstevens@yahoo.com and visit her website http://thethankfulrevolution.com to leave your comments. 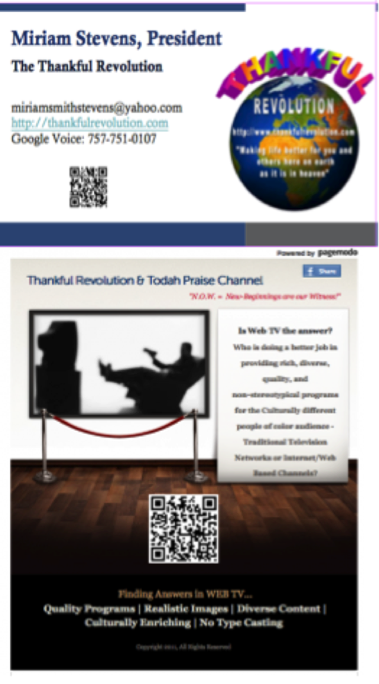 Thank you for taking a moment to learn of this tenacious and driven women who elected to not avoid getting in the game and become an agent of change.

Miriam S. Stevens aka "The Brand Paramedic", is an online social multimedia network strategist. She works with entrepreneurs, special interest groups, and non-profits to develop a social media campaign, marketing strategy, and customer engagement blueprint. She offers this three-prong approach to successfully connect business brands with their clientele. As the creator of MsStevensPR.Com, Miriam encourages productive, one-to-one focus meetings to pinpoint a company’s vision, research their targeted audience, and develop the right implementation plan. View all posts by msstevenspr

After you accept Jesus as your Lord and Personal Savior Now What?

Men can be raped too – Jack’s story Revisted.mov

Miriam Stevens has a Q and A with Emelyn Stuart Web TV Producer.mov